The most precise method of metal testing that Eastern Applied Research offers is through various Optical Emission Spectrometers (OES).  The technology is a destructive method of analysis, leaving a slight burn mark on a sample, but offers users highly precise measurements that include light element quantification.  In addition to high precision, OES technology expands the achievable alloy library (ie, Carbon steels and L grade separation among others).
The following is a very basic overview of how OES works but Eastern Applied will be adding technical blogs on various details of the technology and analyzers offered.  Feel free to contact us if you have any immediate questions or interest in detailed overviews and we will be happy to help.
HOW OES WORKS (a summary)
Similar to the other two metal testing technologies we offer (LIBS and XRF), OES technology is based on the excitation of atoms.  While the non-destructive XRF approach is based on a ‘kick out’ of electrons at inner shells, OES technology is based on the excitation of electrons of the external orbits by thermal sources.  In OES, the energy to excite the atoms comes from a spark formed between the sample and electrode which cause the electrons in the sample to emit light.  This radiated light is element specific and is converted into a spectral pattern – by measuring the intensity of the peaks in this spectrum, the OES Analyzer can produce qualitative and quantitative analysis for the measured sample.

​SOURCE
The source starts the entire process and is the electrical discharge generated between an electrode and the sample.  Different OES systems are based around Arc (in air) and Spark (in Argon) excitation methods.
Both methods offer various benefits and make them appropriate for different goals – Arc source is primarily used for metal sorting (mix-up control) while the Spark source can offer highly precise quantification and is preferred in process control at foundries, mills, research, etc. 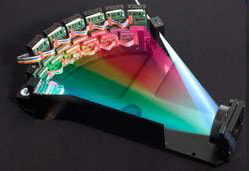 OPTICS
The basic optic configuration includes optical fiber that transmits the plasma light from the probe into the optics.  The light is then split into its component wavelengths and reflected.  At this point it is measured by detectors, which can either be CCD arrays or photomultiplier tubes.  There is a lot behind the optics system and future technology blogs may touch on some of it – in the meantime, contact Eastern Applied to learn more.
READOUT SYSTEM
The readout system takes the electrical signals of the detector and provides a ‘visual’ indication; which means the presence of chemical elements is indicated in light intensities.  The ‘light intensities’ can either be processed into an analysis mode (quantification) or a sorting mode (pass/fail).